This project Aims at giving employment to women  affected with or infected by HIV/AIDs within Ramula community, by using the sisal plant and dicorticator machine.It is one of our journey to find solution to poverty epidermic within a household by bringing self reliance and sustainability to women and youths who are jobless.

Sisal plant is a greenish plant in color characterized by its leaves which grow to a length of over one metre or so and yield a long, creamy -white and very strong fibre. Able to sustain quite extended periods of drought, sisal is a hardy plant that can prosper in areas of limited rainfall. But It not planted in fields, we normally use it in Kenya for ropes and carpet while some of it are exported outside country where the demands are high like in countries like Brazil, China, Cuba, Haiti, Indonesia, Kenya, Madagascar, Mozambique, Mexico, South Africa, Tanzania and Thailand e.t.c. It’s a hedge plant that grows along fences, and is a backup source of income for when our normal crops decline due to drought. In Kenya almost you can find it everywhere.

The plant does well in most rural areas where unfortunately the community does not see its importance and opt to cut it a way since it attract most dangerous reptiles like snakes to be there hiding places and breading places where as in some areas it is of importance and it is grown in large scale in plantation.

In some region in Kenya like Miwani,No one takes sisal seriously as a source of profit and a plant that can be used to create employment to many people.This is because it’s a tedious plant to process as one need to cut the leaves into several strips,dry them and pull the dried leafs off using rudimentary machine.This is much labour intensive and one can take almost one day to remove flesh from the plant before drying process.

The fact that the materials which is the plant itself is easily available and the large population of people are jobless in this rural part of kisumu,RESTORINGHOPES MNISTRY(RHM) had thought of buying Sisal Decorticator, which separates the fibers from the leaves, and pays for itself in a span of one month,

Since sisal could be of importance in term of job creation and a very crucial cash crop for survival for that mater-without it ,the rural poor have nothing to live on and as such, RHM  have encourage the population to plant sisal since the machine could provide market for it.

The decorticator is basically a cylindrical drum in a frame that strips the green husk from the sisal leaf and grinds the inner fiber into strands with blades,it can basically mean husk removal.It has a horsepower that can be powered by diesel or electricity.The machine itself now cost $2000.

A decorticator works by inserting a sisal leaf halfway,it crushes the leaf between the rollers, then turns the raw leaf into strands of fibre.

The fibre are sold to the local traders and some are used to make ropes which are sold in the local market.

HOW CAN YOU HELP US?

RHM HAS only one double dicorticator machine, which have created job for 12 jobless youth,women and men  in the community.We are really in need of more machine which will ensure high quality product of the sisal and will help absorb more jobless by creating job for them and further increase the income.We need the following machines.

A twin machine is composed of a 0.5-horsepower electric motor, a fly arm, bobbin, hub, friction belt and a smaller feeding motor of 1/16 horsepower.It is used to spins the sisal fibre into a this twin. Normally the twinned fibre is used in many shops and supermarkets to tithe the goods,Also as a rope it is sold in the shops and supermarket. 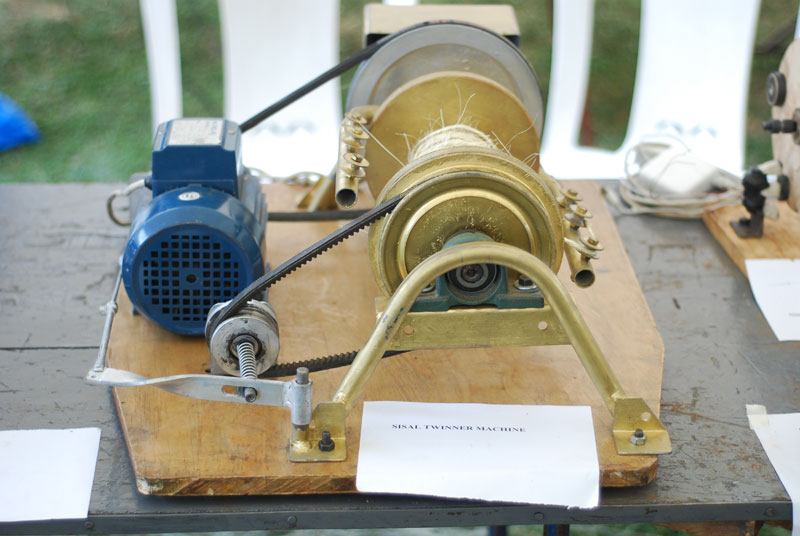 The sisal rope spooling machine packs the spun twine to prepare it for sale. It can spool different quantities and includes a two-horsepower motor that spins a couple of rollers.
Absolute truth is that One broad, pointed leaf plucked from the sisal plant can earn a Kenyan farmer 5 shillings, or about $0.05 USD. But the same leaf, processed, spun into twine and spooled can sell for 100 shillings, or $1.15.This profit makes it easy to pay the salary to the workers and the profit can be got out of it and with one decorticator and two twine machines, a farmer can transform 120kg of sisal into twine in eight hours. That amount could sell for $150.
When One more and two machine can be bought the project will be able to absorb additional workers who are jobless in the community.Currently the company has the double dicorticator machine powered with diesel,but if electricity could be used to run the machine in the company will be talking of increasing output and more income in terms of profit.

A brushing is important machine in this process, it is this machine that determines the grade of the sisal in the market.Before baling sisal must be brushed to remove pieces which adhere after decortication and drying.
Brushing also frees individual fibre from each other and removes the short fibres, which are called tow. -Brushing machine contains revolving metal beaters; hanks of fibre are fed into them by hand, one end first and then the other.

>Build a community clinic in a newly acquired land , paint is and landscape.

> Get a means of transportation of sisal leaves from the fields to the processing centre.